Mother of the Bride

Before The Wedding
Given her relationship with the bride and her traditional role as hostess of the reception, she often has the busiest job of all the parents: helping coordinate the entire event.

The bride’s mother (along with the father) typically determines a portion of the guest list (how large can depend on who is paying for the event and whether one family is significantly bigger than the other). She can also act as an ambassador, spreading the word about where the couple is registered or tactfully explaining if children are not invited, for example.

While she may assist with many of the arrangements, the mother of the bride is not technically a member of the wedding party unless her daughter asks her to be. “I knew I wanted my mom, Judith, to be my matron of honor,” says Betsy Freedman, who wed husband Dave in October 2004. “We are very close and there is no one whose opinion I value more,” she says.

Though the bride’s mother attends the bridal shower, she should not be the host, lest it appear she is soliciting gifts for her daughter; however, she could help out with some of the planning.

Then there is that magical shopping trip when the mother of the bride accompanies her daughter to find a wedding gown; she may even offer the bride the dress from her own nuptials. As far as what she’ll wear herself, she typically chooses her outfit first, then tells the groom’s mother about the color and style of her ensemble so that the moms won’t clash.

On The Wedding Day
The mother of the bride takes her seat to the left of the aisle in the first row, her entrance marking the start of the processional. Or, as in Jewish ceremonies, she and the bride’s father escort their daughter down the aisle together. After the ceremony, the bride’s mother stands first in the receiving line. At the reception, she sits at the parents’ table with the groom’s father to her right, the officiant to her left, and the bride’s father directly across from her. (If the bride’s parents are divorced, they may sit at different tables, perhaps with relatives.) Finally, she takes to the floor for a special dance with her husband or new son-in-law. 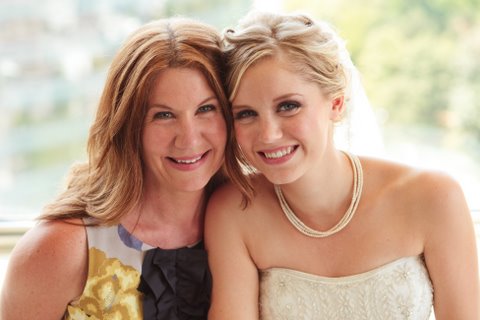