Why and How to budget for a celebrant 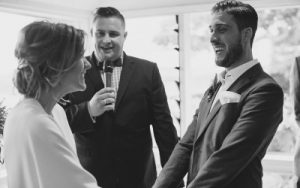 Awesome wedding celebrant Hi, my name is Josh, I’m a gadget-obsessed-nerd and Foo Fighters fan married to Britt, my awesome wife of four years, and we have the great honour of travelling this vast planet celebrating that marvellous union called marriage. We’re just two kids in love interested in other kids in love. That’s my story, what’s yours? We’ve got offices in Brisbane and the Gold Coast and visit the rest of Australia and the world regularly. Let’s chat in person or on Skype to make sure I’m the right guy to create and lead your awesome wedding ceremony ✌?

A common conversation we have with couples being married is about their wedding budget, and in particular, their budget for a celebrant. I get asked how much people should budget for a celebrant, or how much should they expect to pay. Celebrants ask me how much they should charge, or if they’re charging too much. Bridal Facebook groups abound with conversations about “my celebrant charges this much” and “you should expect to pay” whenever the topic arises.

Even I am far from qualified to talk about how much you should budget for celebrant, if only because it’s not my marriage ceremony. It’s yours.

So what is a celebrant’s role in that celebration? I see celebrants having three responsibilities in the wedding:
1.All of the legal stuff
2.All of the feel and experience of the ceremony
3.All of the sound

So the legal stuff is easily achieved, simple, and short.

The audio part of the ceremony is something most celebrants get wrong. It’s a common complaint I hear about ceremonies. Something about the celebrant not giving the couple a microphone, or not knowing how to use a microphone, or not having it up loud enough, or the microphone dropping out a lot. I’ve researched the portable speaker system market fairly heavily and I can only find one portable, battery-operated wireless PA (public amplification) speaker system that I think is good enough to use for a wedding, and fully kitted out it costs about $5500 AUD, it’s a Sennheiser. Most celebrants are using MiPros and other systems that just don’t sound any good.

And then there’s the feel and experience. This is a big one. You’re hoping that a) your celebrant turns up, b) they’re prepared, c) they know you well enough to talk about your marriage, and d) they’ve got the stage presence to create an amazing experience for you to be married in.

That last part is hard. Because you’re looking for someone dedicated to the art. They’ve probably quit their day job, or they’re trying to, so they can dedicate their time to creating your ceremony and running a sustainable business. You’re looking for a person that has a heart and a brain and they work in sync so that they can talk about your marriage in a personal and real way. You’re trying to find an officiant that has some rungs on the board, they don’t get nervous in front of crowds, they bring something special to the public presentation that is your wedding.

You’re looking for not just any person, but the right person for you.

How much should you budget for that person? As much as they cost.

You should budget as much as it costs for you to secure the services of that amazing celebrant because your ceremony is worth it. Because you’re not inviting everyone to the reception and then making a side note saying “if you’re available two hours earlier we’re doing this shitty thing in the park”. The wedding invitation is to the ceremony. Its the main event. It’s the big deal moment where you cross the divide from two kids in love, to marriage.

How to budget for a celebrant